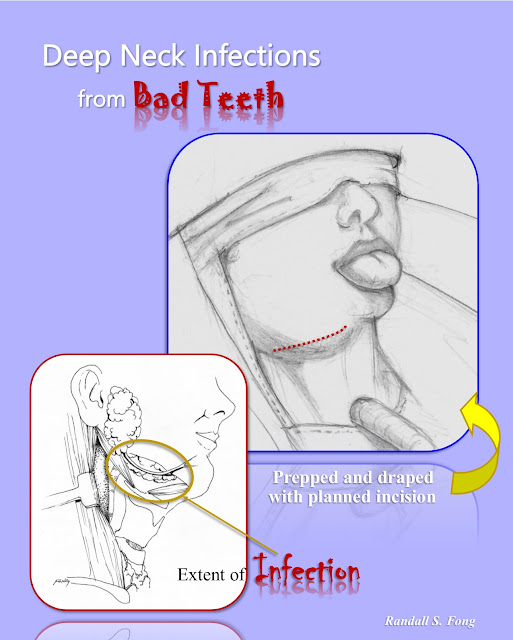 Don’t mean to churn your stomach during this feasting holiday, but I couldn’t resist posting this.  Not only can bad teeth lead to bad sinus infections, they can also cause horrendous neck infections.  Here’s a little food for thought for your Thanksgiving pleasure, but if you find a tender tooth while chomping on turkey, don’t put off getting to your dentist in the not-to-distant future (i.e., ASAP).

So here’s the pathophysiology--one of the many fancy terms used mostly during med school, which we seldom use in the real world, but once in a while like to throw around to impress people around us.  Let’s just say that infections from a tooth can spread along tiny lymphatic channels to lymph nodes within the neck.  Once bacteria proliferate, the lymph node(s) gets larger to fight the infection, and may suppurate, meaning pus is formed.  Pus is a funny word.  But those three little letters evoke a similar reaction to most anyone hearing them, a wholly disgusting experience at the far end of the unpleasantness scale.  Simply put, pus is a putrid, rotten collection of live and dead bacteria mixed with inflammatory cells—dead and alive as well--recruited by the body to ward off the infection.

Mop up a dollop of mash potatoes or stuffing with a generous helping of thick and rich gravy and let’s continue.

If the infection extend out of the node(s), it can spread to surrounding tissues.  Pus can create a cavity inside the body, called an abscess.  Sizeable abscesses become difficult for the body to clear.  Antibiotics may help if the abscess is small or in its early stage of formation.  If not, then surgery is required.  Following is a case several years ago (a rendering from my recollection at the time is shown in the title illustration). 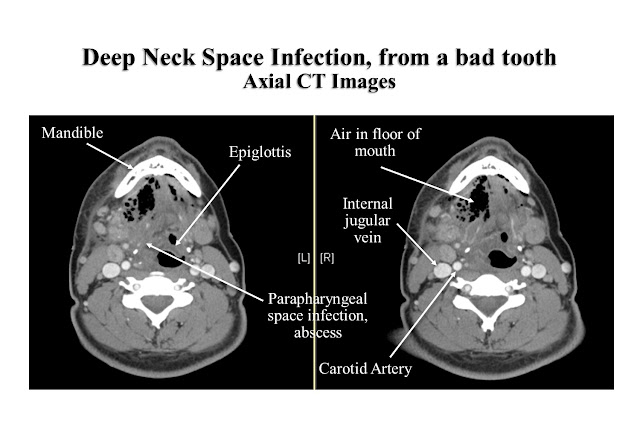 This was a young guy who was transferred from another hospital.  He had an infected tooth that was removed by his dentist two days before.  Only his neck began to swell despite the dentist treating him with antibiotics.  His floor-of-mouth too was swollen, pushing his tongue upwards and out, preventing him from closing his mouth.  He went to his local ER where they did not have ENT coverage.  Once he was transferred to our ER, I examined him, saw his CTs, and immediately brought him to the OR.  The CT shows air in the floor of the mouth.  This is a bad sign, indicates a gas-forming bacteria, and infections of this kind can rapidly spread beyond the confines of the mouth and neck.  The infection spread next to his throat or pharynx, called the parapharyngeal space, extending deep to his submandibular gland (the salivary gland below the mandible).  The infection also pushed his larynx towards the left with edema (swelling of the epiglottis); this can lead to airway obstruction.

Given the short period of time the infection developed, the only recourse was to take him immediately to the OR for surgery and drain the abscess.  Given the swelling in his mouth and the potential for airway obstruction even after surgery, I did a tracheotomy (a surgical opening below the larynx to place a breathing tube) first to secure the airway.  The neck was then incised below the jaw (mandible) and dissecting carefully to avoid vital stuff such as the jugular vein and carotid artery, I eventually entered the abscess cavity.  Copious pus poured from the wound, immediately permeating the entire operating room with a horribly foul stench.  The scrub tech gagged and nearly vomited, the circulating nurse pinched her mask tightly around her nose screaming, “Dr. Fong!  That smells awful!” as she ran from the room to get something, so she claimed.  I responded in kind to the effect, “Hey, I just work here.”  The anesthesiologist made some amusing comment as anesthesiologists often do, peering over the drapes.  We irrigated the hell out of the surgical wound with lots and lots of antibiotic solution.  Drains were placed to allow egress of fluid and secretions created from the healing inflamed tissues, and to prevent reformation of pus and recurrence of the abscess.  The wound was closed lightly.  We transferred him to the ICU postop.  The drains were removed 3 days later and he recovered well.

So you can see, infected teeth can lead to serious and gnarly neck infections, yet another example of the importance of good dental hygiene and a reminder to get to your dentist pronto if you have a problem with your tooth.

Return to what you were doing (perhaps eating) with these happy thoughts in your head.