Hearing and The Tuning Fork—An Instrument of Torture? 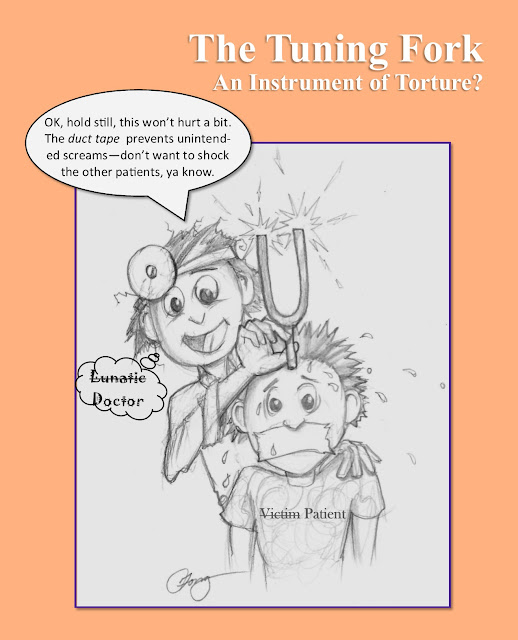 See that instrument above?  Look menacing?  You may ask, “Does it hurt?  Is my doctor a masochist?  Or is he merely a lunatic?”  Thoughtful questions we’ll answer in a minute.

One day you’re sitting in the ENT doctor’s exam room, reading the latest viral You-Tube video on your cell phone (despite ignoring the signs everywhere instructing you to silence and put your cell away) when the doc gleefully enters the room.  He introduces himself, but you raise your finger as a signal to pause, that you’re in the middle of an entertaining video that you simply must finish.  After completion, you finally look up at the doc, who is turning to leave the room to see another patient.  You yell something like, “Hey!  Where ya going?” and the doc turns back around.  He reintroduces himself since you weren’t paying attention the first time and asks what brings you to the office.

You declare that you don’t have a problem, but your spouse, friends, coworkers, even your mother, all complain about your hearing.  You clarify that your hearing is fine--it’s everyone else who has the problem.  Either they’re speaking too softly or enunciating poorly.  After repeating things to you over and over again, they shake their heads in frustration and yell at the top of the lungs, demanding you see a doctor.

“So doc, what’s wrong with those annoying people?” you ask the bewildered doctor.  Just then you hear a ping on your cell and it’s a must-see text message with a video of two adorable kittens riding atop a German Shephard chasing a frazzled coyote.  After putting your cell back down, you stare at your doctor.

“So what gives doc?  You haven’t answered my question.”

The doc looks perplexed and perhaps annoyed, and after rudely suggesting you should not turn to your cell every time it makes a noise, you agree to allow further history-taking and the performance of a physical exam, despite all the rings and pings spewing forth from your beloved phone.  You have a burning desire to pull out your cell, but the doc is doing all sorts of weird things like talking to you, examining you, even looking into your ears.  This is all semi-acceptable to a point, but then out comes this whacked-out device.  You’d swear it’s an instrument for torture, payment for your disrespectful cell phone use.  At that moment, you wish you’d purchased that Tazor attachment for your phone.  You feel defenseless.

O.K., the tuning fork looks a little creepy.  It has the shape of a blunt serving fork.  Whenever I bring this out and strike it on my elbow to activate it, some folks respond with a look of horror and back away in the exam chair.  A few kids had jumped out the chair and ran to Mom or Dad or headed for the exit.

Anyway, after explaining I won’t strike their head with the fork or put it onto some other unmentionable body part, that it merely vibrates which feels kinda funny but is painless, most people allow me to proceed, though there’s a doubtful expression, an uncertainty of whether I’m still a creepy dude.

There are various sizes of tuning forks, each vibrates at a specific frequency.  Once activated by striking the fork on a hard surface such as the edge of a counter or table (I use my elbow, which sometimes hurts, but I’m all for suffering for the patient) sound is generated by the movement of air molecules in wave-like fashion from the fork.  Check out the prior article Hearing and The Physics of Sound Mechanics for more glorious detail on the working mechanics of sound.

Sound waves must travel into the ear canal and vibrate the tympanic membrane (abbreviated TM) and the small bones (ossicles) attached to it.  Collectively, the TM and ossicles are part of the middle ear.  Afterwards, a bunch of cool processes occur within the inner ear (cochlea) that eventually convert sound energy into electrical signals that travel along the auditory nerve to your brain, where the sound input is further processed into meaningful information.  See Hearing and How the Ear Processes Sound for more discussion on how the ear processes sound.

The tuning fork is a nifty device that can provide a lot of information about one’s hearing problem if more elaborate equipment is not readily available (i.e., a fancy, expensive audiometer and a steel-encased, soundproof audio booth).  But before we get into the features of the fork, I’ll briefly touch upon the different types of hearing loss.

Conductive hearing loss (CHL):  this arises when there is a problem in the middle ear, the part of the ear that includes the tympanic membrane and the ossicles attached to it.  Sound is conducted along these small but moveable thingamajigs to the cochlea.  Examples of problems causing CHL are a tympanic membrane perforation (hole in the TM), otitis media (where there is pus or fluid in the middle ear behind the TM), stiffness of the ossicles (otosclerosis is an example) to mention but a few.

Sensorineural hearing loss (SNHL):  The cochlea is the snail-shaped sensory organ that ultimately receives input from the TM and ossicles.  It is connected to the brain by the auditory nerve.  Hearing loss due to a problem with either the cochlea or the auditory nerve is termed sensorineural hearing loss, since it is often difficult to determine whether the cochlea or the nerve or both are affected.  One of the most common causes of SNHL is loud noise exposure.  SNHL also often occurs as a normal decline of hearing with aging, known as presbycusis.

Mixed hearing loss (MHL):  This arises when both a conductive AND a sensorineural hearing loss is present.  For instance, a hole in the tympanic membrane in a patient with noise-induced SNHL will create a mixed loss, or an elderly patient (with presbycusis, or age-related SNHL) with otitis media (fluid behind the TM).  In both examples, the defect in middle ear prevents proper conduction of sound from the TM down the ossicular chain creating the CHL.  The defective cochlea or nerve from prior noise injury or aging creates the SNHL.

There are two main tuning fork testing methods: the Rinne and Weber tests.  Look to my simpleton drawings that illustrate these concepts.

Weber Test:
The Weber tests for side of involvement.  The vibrating tuning fork is placed in the middle of the patient’s forehead.  Other options: the fork can be placed between the eyes on the nasal bridge or on the upper two front teeth (the incisors), depending on the doctor’s fancy or peculiarity or idiosyncrasy or overall weirdness-in-general.  With normal hearing or hearing loss that is equal in both ears, you’ll hear the sound of the tuning fork pretty much in the midline or in front of you where the fork is placed.  This is due to sound travelling from the fork, through the air equally to both ears. 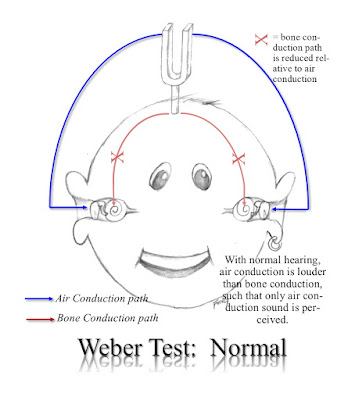 However, if say your left ear has diminished hearing, you’ll hear the sound in your better hearing right ear.  This intuitively makes sense (I hope) since sound will be louder in the better hearing ear.  Your brain interprets this as hearing it in only one ear, even if the worse ear still can pick up the sound signal.  It happens that the sound perceived by the better ear cancels out what might be heard in the poorer ear with this test.  This is the case if your left ear has a SNHL. 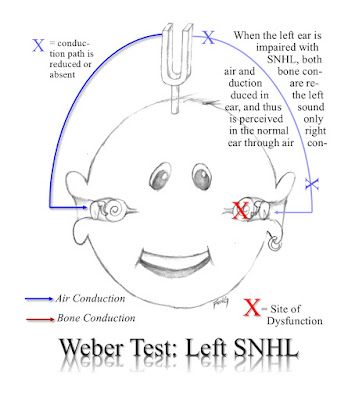 However, if you have a CHL in the left ear, the sound will be heard in the LEFT EAR.  Yes, I did not stutter; you will hear it in the impaired left ear.  Let me explain. 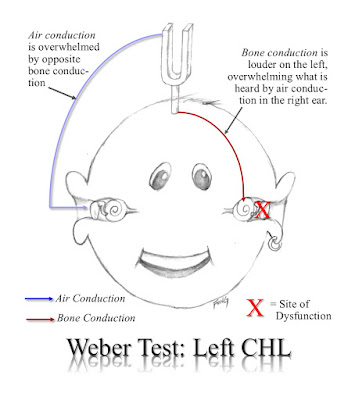 In the case of CHL, the sound travels through the bone of your skull to directly stimulate the cochlea (which is incased in bone, in fact, the hardest bone in the body), thereby bypassing the TM and ossicles completely.  Yes, sound travels through bone, where molecular forces are transmitted from one molecule to the other.  You can hear sound transmitted through your skull, no matter how dense you’ve been told it is.
This is called bone conduction.  Air conduction is the normal means which sound is picked up by the ear; i.e. sound energy travels through the air to strike the TM.  Since the TM and/or ossicles are impaired, sound travelling via air conduction is impaired, and the sound travelling via bone is louder than that travelling by air.  Since the cochlea on the affected ear is directly stimulated through bone, this is heard more loudly air conduction sound received by the opposite normal ear, and the reason you’ll hear the Weber test in your poorer hearing ear.

The Rinne test is done by placing vibrating fork first next to the ear canal (entrance to the ear) but not touching the ear itself.  This is the normal way sound is delivered to our ears.  Then the fork is placed behind the ear onto the skull, to transmit the sound into the skull.  You are than asked which sounds louder.  This Is another test of air and bone conduction.  To simplify things, I usually call he air conduction test “number one” and the bone conduction test “number two,” asking the patient, “Which is louder: number 1 or number 2?” as I place the vibrating fork 1st near the ear canal and afterwards onto the skull behind the ear. 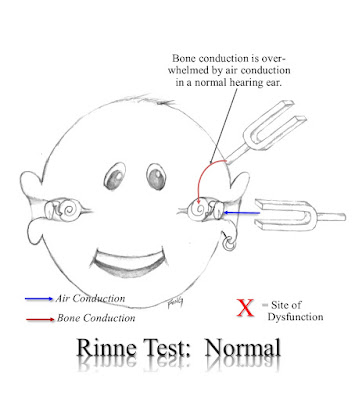 By combining the results of the Weber and Rinne tests, one can derive a pretty good idea of type of hearing loss that might be present.  For instance, if you hear the Weber test in your right ear and the Rinne shows bone conduction is louder than air conduction, this is a good indicator of a CHL in your right ear.  If the Weber is heard in the left ear and the Rinne testing in both ears shows air conduction is louder than bone conduction, then you’ll have a left SNHL. 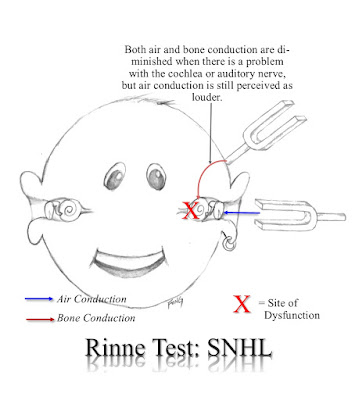 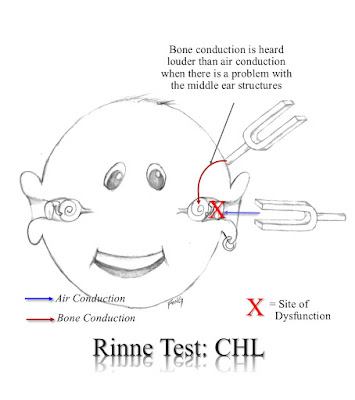 If the Weber is heard in the left but the Rinne is equivocal in the right (i.e., you can’t tell if air is louder than bone conduction) then you might have a mixed loss in the right ear.

Of course, if you have a severe MHL in one ear with a substantial SNHL, the Rinne in that ear might reveal reduction in both air and bone conduction, since the cochlea or auditory nerve is so impaired that it is difficult to pick up sound by direct cochlear stimulation through bone.  Other degrees of MHL however can give different results, making the tuning fork exam even more confusing in such cases.  This is where more accurate testing is needed with elaborate equipment as I mentioned above, with an audiometer, a tympanometer (device that measure TM movement) and a qualified audiologist (one specifically trained in hearing testing using these devices).

So relax if you ever see your doc taking out the ominous appearing tuning fork, and thank God you’re not strapped to the chair with duct tape over your mouth to silence your screams.