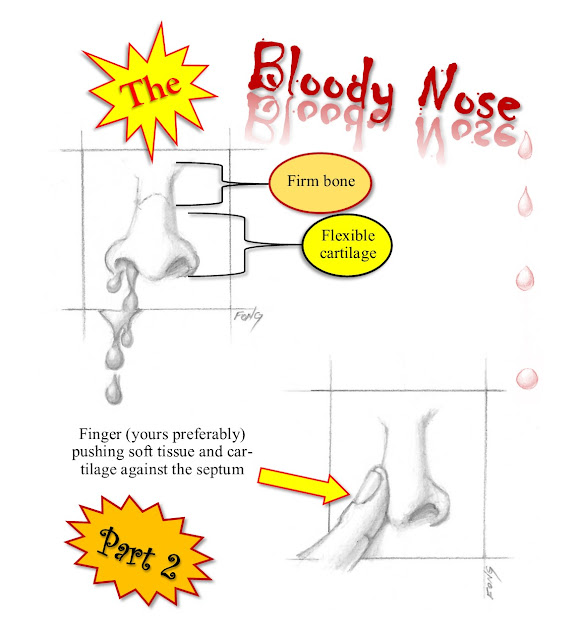 Summer is here and ‘tis the season for my favorite B’s: barbecue, beer, bikini’s (oops, you can slap me for that) and the bloody nose.  That last item was nasty sarcasm—wouldn’t wish that upon anyone.  Nosebleeds are a bane to most of us ENT docs.  Epistaxis is the proper term and they can be a royal pain-in-the-butt and sometimes downright scary.  I’ve touched on this topic before in Nosebleed (Epistaxis) and my personal experiences on the matter, but this article elaborates a bit more on the causes, anatomy, treatment, etc.

Why?  Dryness.  Welcome to Summer and Winter

The nasal passages are normally nice and moist.  However, they often become dry especially in arid conditions such as dry heat in summer and dry indoor heat in winter.  Dryness causes mucosal irritation (mucosa is the pink tissue lining the inside of the nose), crusting and can rupture any of the numerous blood vessels in the nose.  The result is a bloody nose.

Where?  The nitty-gritty on nasal blood flow

The picture below shows the blood supply to the nose.  I’ll admit, I drew many of those vessels relatively larger than life for illustrative purposes. 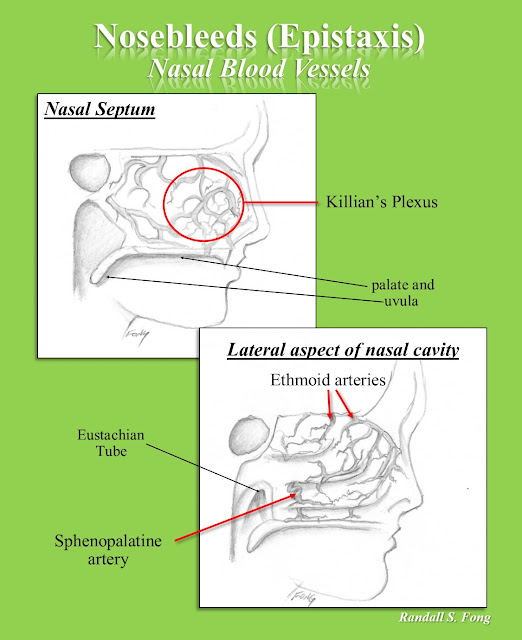 Bleeding can occur virtually anywhere in the nose, but most of the time the source arises from a mesh of vessels on the nasal septum called Killian’s Plexus.  Bleeding can occur farther back, which often is more difficult to treat, particularly if the source is from a branch of the sphenopalatine artery.

Below are some home remedies should you have a persistent nosebleed:

1.  Blow your nose.  Yeah, this sounds counter-intuitive, but clearing your noggin of blood clots can actually help.  A blood clot can consume clotting factors naturally found in blood.  We call this a local coagulopathy.  There’s less clotting factors to stop the actually bleeding.  Also a clot can hold blood vessels open.  This also occurs in surgery, where clearing a clot from a bleeding site can slow or cease hemorrhaging (we also do this in post-tonsillectomy bleeds).

Pinching the nose helps as well, or placing a finger firmly against the entire soft part of the side of the nose to close off the bleeding nostril (pinching both sides might be easier; I’ve personally done both).  See the title picture above.  The upper part of the nose is nasal bone.  The lower 2/3 is mostly cartilage and skin, both pliable.  Pinching or pushing the soft tissue against Killian’s Plexus on the septum is quite effective.  Keep the pushing or pinching for at least 15 minutes.

To give your fingers a rest or for more troublesome bleeding, you can pack the nose with a wad or rolled-up piece of toilet or tissue paper.  I’ve seen patients use other household items such as tampons effectively (the act of applying pressure to control bleeding site is called tamponade).

Over-the-counter (OTC) sprays such as oxymetazoline (i.e., Afrin) or phenylephrine (i.e., Neo-Synephrine) are vasoconstrictors, meaning the constrict or narrow blood vessels.  Meant to decongest the nose, they are also useful meds for nosebleeds, often used in ENT offices, the emergency room (E.R.) and in surgery.  They often take effect in minutes.  You can also soak a good-sized cotton ball with the spray and pack it into the nose for combined pressure/vasoconstrictor effect.  Caution: don’t use these sprays for more than 3 consecutive days to avoid Rhinitis Medicamentosa.

If the bleeding comes and goes and you can wait a day or more, a visit to your doctor or an ENT specialist often can resolve the problem.  There are a variety of measures to combat epistaxis.  However, when bleeding persists despite the at-home measures, you should head for the ER.  ERs tend to have a number of things at their disposal, not to mention proper monitoring devices, i.v. fluids, and usually access to an ENT doctor on-call if one is needed emergently.  Treatments include:

A nifty plastic device that literally clamps your nostrils tightly closed.  This is the same concept as nasal pinching but is done more persistently and effectively.

Packing with cocaine or similar agents that decongest as well as anesthetize the nose (or a an OTC decongestant mixed with 4% topical lidocaine also works well).  Usuall done with large cotton balls or strips of ribbon gauze.

Cautery is the act of sealing blood vessels.  It can be done with an electrical device but often a chemical agent such as silver nitrate (AgNO3) is very effective and usually readily available.  The AgNO3 applicator looks like a long match-stick, and with kids I must convince them I’m not going to light them on fire.  First a decongestant and anesthetic solutions are sprayed into the nose. 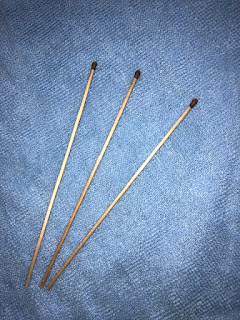 I often pack the nose lightly with a cotton ball soaked in which further helps to decongest and numb the nose but also serves as a pack should bleeding occur while cauterizing.  I move the cotton a little off the target vessel(s), keeping it in the nose, while cauterizing and when done, removed the pack afterwards.

For more serious bleeds where a site to cauterize cannot be identified, a long-term pack often is required.  There are a variety of packing material from long strands of ribbon gauze layered into the nose.  One type are expandable sponges called Merocel.  It comes tighly compressed so that insertion is easier.  Notice the length of the pack on the pictures to follow.  The nasal cavity is longer than one imagines, as the prior pictures demonstrate, and is about 7-8 centimeters (2 ¾ to 3 ¼ inches) from front to back.

The other option are inflatable balloons.  Also called “Rhino-Rockets” or Rapid-Rhino, these balloons are covered with a mesh that activates platelets and other coagulation factors in the blood can be quite effective.   Prior to placement, they must be dipped or sprayed with sterile water to activate the clotting agents in the mesh.  The balloon is then inflated with a syringe.

Packs are usually left in for at least 3 days.  One should be on an antibiotic to prevent an infection created by the pack, some folks need prescription pain meds.

Though often not the cause, elevated blood pressure (BP) renders controlling a bleeding nose more difficult.  Often BPs are elevated due to anxiety, but if a patient is on a BP medication and his/her pressures are very high, lowering this is crucial, and can be done effectively in the ER setting.  For those with intermittent nose bleeds, good BP control can be managed by the primary care doctor.

This is the last resort.  I won’t dwell on this too much, since it is a lengthy topic.  When bleeding persists despite the above measures, patients may be taken to the O.R. to try to identify the bleeding site under general anesthesia.  Often this is done using nasal endoscopes and electrocautery.  Less frequent methods include blood vessel ligation, either in the nose or through an external facial incision (to access the ethmoidal arteries) or through the maxillary sinus to ligate the sphenopalatine artery.  These are more complicated procedures.

They say an ounce of prevention is worth a pound of cures, and this holds true for nosebleeds.

Other than the nasal decongestant sprays mentioned above, if you’re taking any type of allergy nasal sprays such as nasal steroids or antihistamine sprays, stop them.  One of the major side-effects of such sprays is epistaxis.  Once the nosebleeds resolve and you need to resume the spray(s), do it properly (Nasal Sprays—Proper Technique and Nasal Sprays—Proper Technique 2).  This reduces the risk of a nosebledd.

For those who’ve had a more serious bleed, avoidance of “blood thinners” also is crucial.  If safe to take you off any of these meds, your doctor may advise you to do so.  Common meds that can increase bleeding tendency are aspirin (acetyl salicylic acid), NSAIDS (nonsteroid anti-inflammatory drugs) such as ibuprofen and naproxen. Others are warfarin (Coumadin), Eliquist, Xarelto, etc.

Keep a bottle of a nasal decongestant spray on hand such as oxymetazoline or phenylephrine.  You can purchase this at the store without a prescription.

And keep the nose moist; I can’t stress this enough.  Spray your nose often with nasal saline, three or more times a day.  This is OTC and can be purchased at most grocery stores or pharmacies.  They also come in gel forms for longer lasting moisture.  Also a cool air humidifier is useful in this respect.

As they say, a healthy nose is a happy (and blood-free) nose, and I hope NOT to see you in the ER for a nosebleed one day.