Tonsil and Adenoid Enlargement in Children and Sleep Disordered Breathing 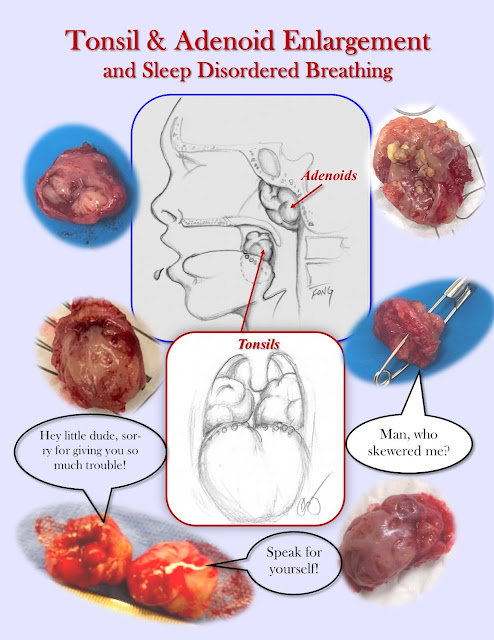 If your child falls asleep at the breakfast table with her face submerged in a bowl of cereal, something may be amiss.  She also snores like a freight train.  Or your young son exhibits uncontrollable behavior, running amok like a madman in a glucose high (and you adamantly clain you’re giving him no processed, refined sugary foods of any kind), and then crashes and naps smack in the middle of his first-grade class during the vital teaching moments when the rest of the kids (aside from a few jokesters) are keenly paying attention.  Something there too may be not-quite-so-right.  Or your 7 year-old is still bedwetting when sleeping.  All three might be suffering from the same ailment.

“And what is that?  Pray tell us!”  you’re probably demanding.

They could all have sleep-disordered breathing, most often caused by obstructive sleep apnea (OSA)

You might witness the problem yourself, or if you haven’t, check on your child while they’re asleep, or as many parents have done, record them during sleep with your cell phone or some other audio or audio-visual device.  You might find they’re snoring—often quite loudly-- then gasp or choke as their breathing briefly stops.  This is an apneic event.  More technically, any pause or stoppage in breathing for ten or more seconds is termed apnea, anything less than ten seconds is called hypopnea.   This collection of repeated apneas or hypopneas is called sleep apnea.  Less likely, this is due to a problem with the brain regulating sleep and breathing functions, and is termed central sleep apnea.  If the problem arises from mechanical blockage of air as it passes from nose and mouth to the trachea and lungs, it is called obstructive sleep apnea (OSA).  Either way, the result is the same; a disruption of breathing that occurs only during sleep.

Obstructive sleep apnea is much more common than central apnea.  It occurs when redundant tissue flops into the airway, restricting the flow of air or causing temporary obstructions.  "Why does this happen and why wouldn’t I die in my sleep?"

Here’s a mini-explanation of sleep apnea and its effects.

1.  During particular sleep stages, there is a period of complete muscle relaxation, a paralysis of the muscles, so to speak.  This is important particularly during dreaming, where you might act out your dream and swing your arms and legs.  Muscle paralysis is a protective feature to prevent you from hurting yourself, or more importantly, your spouse or bed-partner, who will kill you in the morning anyway for smacking them around.

2.  This muscle relaxation also includes muscles in and around the mouth and throat.  Soft tissue thus can fall into the airway as one breathes in, restricting or closing the airway off completely.  Rattling of tissues also causes snoring, and the reason you don’t snore while awake.

3.  If a breathing stops due to tissue blockage, the body continues to inhale until it can break through the blockage to allow the passage of air.  This is the reason most people won’t die of asphyxiation in their sleep.  However, this increases the effort of breathing leading to fatigue, and can cause a partial awakening which disrupts the normal sleep rhythm.  Poor sleep quality is a result.

4.  Open-mouth breathing may occur in an attempt to maximize air intake.  This leads to a dry mouth and throat, throat soreness, and sometimes dental problems and decay since there is lack of teeth contact to the protective saliva.

5.  Poor sleep quality leads to daytime symptoms when the child is awake.   They may be sleepy despite a long night in bed.   They can feel fatigued, irritable, emotional due to lack of quality sleep.   They can also have a lack of concentration and be hyperactive.  The latter is a paradoxical effect, and nowadays sleep apnea is a consideration in kids with attention deficit problems

6.  Due to disordered sleep, bedwetting (enuresis) also can occur, since the child is trying to catch up with sleep in between the apneic episodes, and the cues of urgency when needing to urinate do not waken the child.

In children, one of the most common causes of OSA are enlarged tonsils (tonsillar hypertrophy).  Also, adenoids often can be enlarged too, and thus tonsil and adenoid hypertrophy typically go hand in hand.

Surgery to remove the tonsils and adenoids is highly effective in resolving sleep apnea in children (check out Tonsillectomy and Adenoidectomy if you’re dying to know the surgical techniques).  Alas, this is not often the case with adults with OSA.  Adults tend to have other causes (mainly being overweight) and surgery often may not resolve nor improve their OSA.

So there is hope for the three kids at the beginning.  Also, the title picture shows a small gallery of removed tonsils, resulting in happier and better-sleeping children (and by the way, despite what the photos suggest, tonsil do not talk).