Nasal Turbinates: A Source of Nasal Congestion When They Misbehave 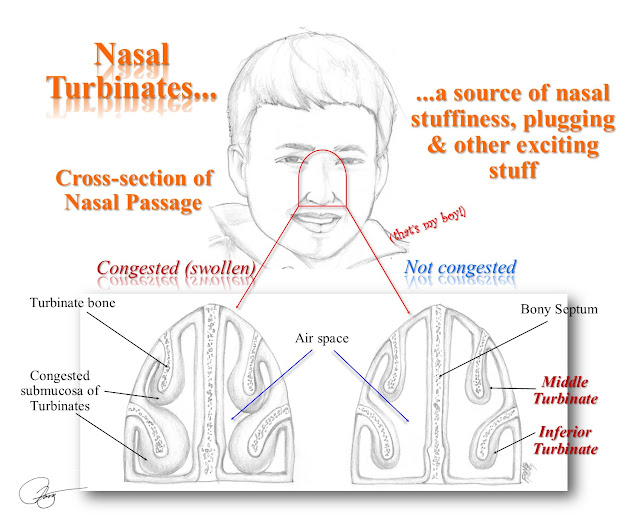 Look deep into your nose and you may notice a large pink structure on one side of the other.  You might not have noticed this before, but then again, you’re probably not in the habit of peering down dark and scary holes.  Before you entertain the thought of picking those things out, you ought to read this first.

That pink, swollen looking thing may very well be a normal structure called a turbinate.  It can have the appearance of a juicy mass or polyp.  You have three turbinates on each side, six in total.  They have nifty names such as inferior, middle and superior turbinates, depending on their location.  The inferior turbinate is by far much larger than the other two and takes up the most space, so it’s more visible with the naked eye.

Of course, there could be other things in the nose that are not-so-normal (which we, in our infinite wisdom as doctors, call abnormal) such as polyps (nasal polyps, antrochoanal polyps),  a tumor or—if you’re a kid or kid-at-heart who loves the challenge of shoving unnatural things into unnatural places—a nasal foreign body.

Let’s assume you have none of the above and you’re looking at a turbinate.

A turbinate is kinda like an outpouchings of tissue inside the nose, so to speak.  They’re bony structures covered with spongey soft tissue (the submucosal tissue) and lined with ciliated mucosa, the pink lining tissue (also called a “mucous membrane”) you see if you ever, perchance from a natural curiosity, peer into your nose.   Cilia are microscopic hair-like projections extending from the mucosal cell.  They help propel secretions and other stuff (such as allergens, viruses, bacteria, irritants, etc) out of the nose.  The mucosa also secretes fluid and mucous to keep the nose moist.  The turbinates are designed to increase the surface area for that mucosa within the confined airspace inside your nose.   Since the mucosa secretes fluid and mucous and fed by a rich blood supply, its purpose is to warm and humidify inspired air before it hits your throat, trachea and lungs.

To achieve this, air must flow in a nice, layered fashion in the same direction, known as laminar flow.  This allows for proper flow across the mucosa, maximizing contact of moving air with the mucosal surfaces. 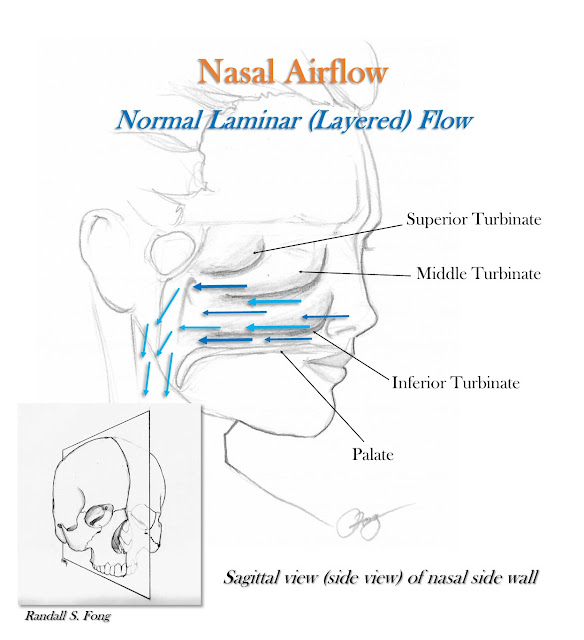 Air that does not flow in a nice laminar fashion is turbulent flow.  Here movement of air molecules in a disordered, whirling fashion, not allowing proper moisturization and warming of the inspired air.  Turbulence also imparts more resistance to flow, since the air molecules are not travelling in the same direction, which increases the work required to move air from one place to another.  Will discuss more about this shortly.

Sometimes the turbinates become over-active, meaning they’ll swell due to a variety of reasons.  Allergies, viral or bacterial infections, vasomotor rhinitis (nonallergic), or the overuse of certain drugs (rhinitis medicamentosa).  This causes the submucosa to become edematous and can cause increased production of fluid or mucous, hence the runny or snotty nose that often accompanies congestion.

Despite the cause, treatment centers on reducing the tissue congestion.  Antihistamines help by blocking histamine receptors stimulated by allergens (tiny particles that trigger an allergic response), decongestants vasoconstrict (narrow) the blood vessels in the submucosa.  Medical treatment has been discussed before, and these range from nasal sprays to medications taken orally (described in Drugs for Kids).

Since the inferior turbinates are the largest and the most prone to cause nasal obstruction if over-active or overly enlarged, surgery is directed to these guys.  The goal is to shrink the mucosa to reduce the size of the turbinate on a more permanent basis.  You may ask, “Why don’t you just remove the darn things?”  Physicians had done this years ago, only many folks then suffered from atrophic rhinitis, an over-dryness of the nose.  Remember, one function of the turbinates is to warm and humify the air as it passes through the nose.  The inferior turbinate plays a major role in this.  In their absence, inspired air does not flow in a nice layered fashion (laminar flow) as mentioned above, but instead becomes nonlaminar or turbulent.  Air flowing in this manner is drier and colder which irritates the throat, trachea and lungs, making breathing more difficult.   Sense of smell is also reduced or altered.  Dry nasal air also is conducive for bothersome crust formation, due to over-drying of the nose’s natural secretions.  Another phenomenon is the Empty Nose Syndrome, where one feels a paradoxical sense of nasal blockage even though they have a large, open nasal airway due to the lack of turbinate tissue.  They feel they cannot breathe well, which is exactly opposite of what the turbinate resection was supposed to cure. 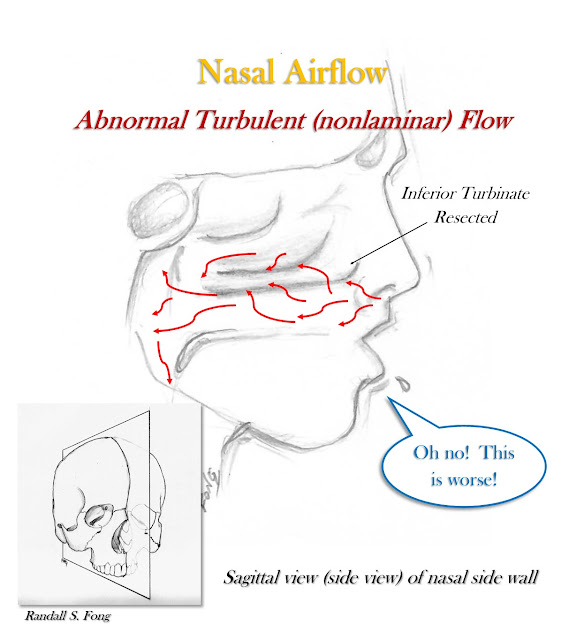 Hence, we no longer remove inferior turbinates.  However, there are means to reduce their volume while still enabling them to do the things they’re meant to do.  This is done by a shrinking the underlying submucosa.  A most common method is passing an electric current into the submucosal tissues, typically via a long needle like device.  This is called a submucous reduction of the inferior turbinate. The heat produced in the tissues creates inflammatory changes that, upon healing, seals and shrinks many of the small capillaries within the turbinate.  Also called cautery or radiofrequency ablation, this procedure reduces blood flow to the tissue and in turn less engorgement of the submucosa.  Later, scar tissue forms (in the form of collagen) which later contracts (this is part of the body’s normal wound-healing process) and thereby further shrinks the turbinate.  Much of the mucosa and submucosa are preserved however.  The result: improved nasal airflow with preservation of the function of proper nasal air warmth and moisture. 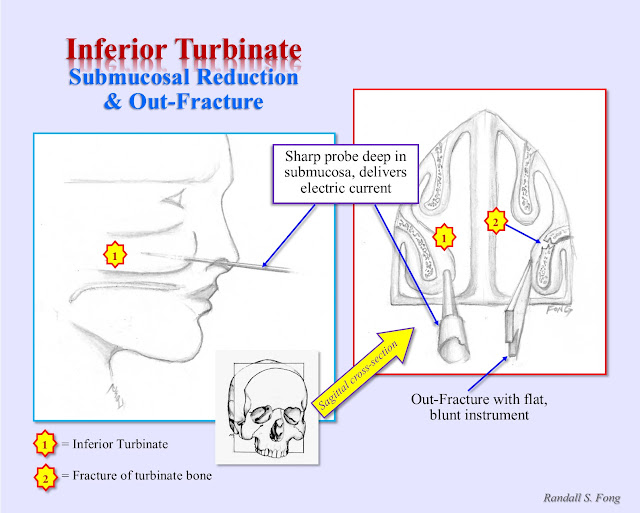 These procedures are often done at the same time as other surgical procedures such as a nasal septoplasty or sinus surgery.

There you have it.  A simple little piece of anatomy serves a major function but, like most things in our bodies, can go haywire when they behave not-so-normally.  Hopefully this information proves useful before you let your fingers do the picking in your nose.