Cancer of the Larynx: A Motivation to Stop Smoking 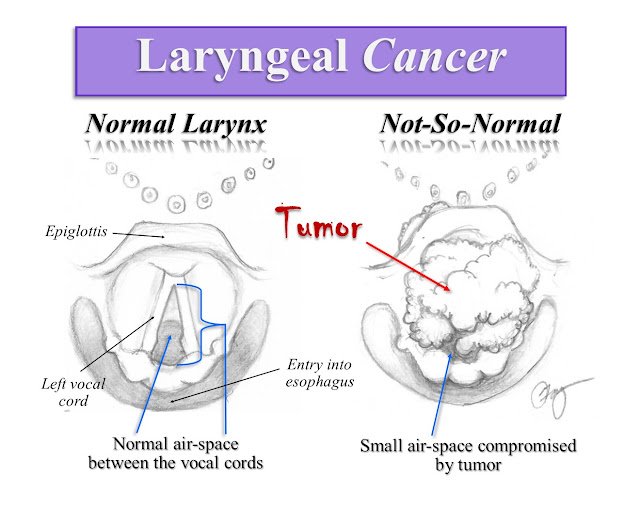 As doctors, we sometimes encounter frightful situations that shock our very core, wishing we were somewhere else far, far away, doing an entirely different line of work.  Here’s a little example.

I recently saw a patient admitted to the hospital from the emergency room with difficulty breathing and a very hoarse, weak voice.   He was a long-time smoker and they initially they thought he was having a heart attack or exacerbation of emphysema.  But given his stridor (noisy breathing), I was called to see him.  He explained he had these symptoms for a few months but his breathing became much worse the last couple of days.  I examined him.  I also did a bedside fiberoptic laryngoscopy (viewed his larynx with a flexible scope) and my spine chilled when a whopping tumor came into view, nearly completely obstructing his larynx, save for very small air-passage allowing him to breathe. 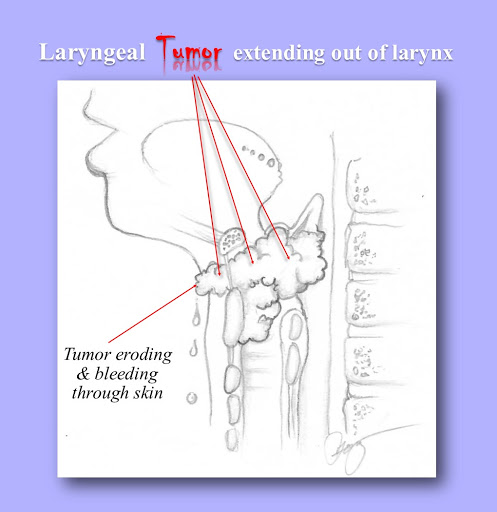 We took him to the operating room for a tracheotomy and biopsies of the mass to obtain a diagnosis.  As I expected, it came back as cancer (more specifically, squamous cell carcinoma).  The tumor was extending out of his larynx and eroding through the skin of the front of his neck.

These pee-in-the-pants moments are not what most of us ENT docs strive to face.  This experience added more gray hairs to my head.

If you smoke, let this article motivate you to stop.  Smoking is a big-time cause of voice box cancer-- laryngeal cancer in medical lingo.  Take heed as this type of cancer can be quite dreadful.  For those recently diagnosed with this disease, take heart knowing that available treatment can be very effective, potentially life-saving, including treatments that can spare you from a laryngectomy (removal of the larynx) and a life of breathing through a hole in our neck.

Most cancers of the larynx are related to smoking.  It matters not how little you think you smoke—it’s still a risk factor.  Over-use of alcohol is another risk factor, and the two combined actually multiplies the risk.  There is also a viral cause (human papilloma virus or HPV) but this tends to be less of a cause compared to other sites of the head and neck.

The location of the tumor influences presenting symptoms, lymphatic spread and subsequent treatment.  The larynx is divided into three major categories:  The supraglottic larynx, the glottic larynx and the subglottic larynx.  For additional information about the larynx, and more nifty pictures, check out Anatomy of the Larynx and The Larynx and Voice Production.  The pictures in this post however should provide enough anatomy to understand the medical jargon. 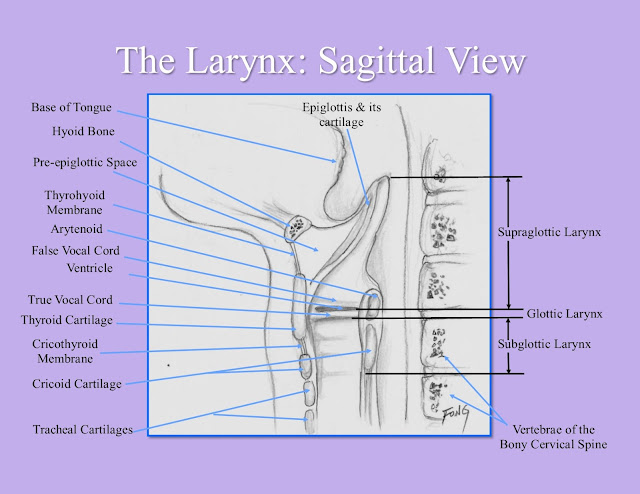 The supraglottic larynx starts just above the true vocal cords at its most inferior (bottom) aspect at the laryngeal ventricle and the structures above.  This includes the false vocal cords, the epiglottis, vallecula and the spaces deep (such as the pre-epiglottic space).  This is important, as tumors involving the supraglottic larynx can easily spread into deeper tissues where lymphatic drainage is rich), potentially carrying malignant cancer cells to various lymph nodes, causing enlarged nodes or a mass (or masses) in the neck.

The glottic larynx includes the both true vocal cords.  The space between the true vocal cords is called the glottic airspace.  Tumors restricting the glottic airspace not only lead to hoarseness and impaired vocal ability, but also shortness of breath.  The true vocal cords and the anterior commissure (where the true cords meet anteriorly at the front) are rather sparse in lymphatics.  Hence, the risk of lymph node involvement is quite low.  Treatment often includes radiation therapy to smaller area of the larynx and does not need to include the lymphatics of the neck.  Likewise, surgery for cancerous lesions that are amendable to surgical removal (via a direct laryngoscopy where a special endoscope visualizes the larynx under general anesthesia) often do not require removal of neck lymph nodes.

Of course, if cancers become more advanced, they can involve 2 or 3 of these major areas, as in the case of the patient above.  Tumors can also block your ability to breathe, putting you at risk of something really, really bad, such as dying of suffocation, which is not a very pleasant way to go.  The tumor can also spread to adjacent areas of the larynx or even to other structures such as the base of tongue, tonsillar area if spreading upwards, or farther downwards into the trachea.  Tumors can even invade outside the confines of the cartilaginous parts of the larynx, through the thyroid cartilage or thyrohyoid membrane and involve adjacent structures such as the soft tissues of the neck, the thyroid gland, the carotid artery, jugular vein, esophagus or to the fascia of the bony part of the spine located behind the esophagus.  The more advanced the cancer, the more extensive the curative measures.

Treatment is typically via two methods: 1. Surgery to include a partial or total laryngectomy (removal of the larynx), 2. Radiation therapy with or without chemotherapy.  The benefit of the latter treatment is potential preservation of the larynx, though the downsides are the side effects of radiation (chronic dry mouth and throat) and potential toxic side effects of chemotherapy.  For more advanced cancers, thre is a third option where both surgery and radiation with/without chemotherapy is offered.  There are pros and cons for each treatment modality, which your surgeon and oncologists will discuss.

This particular patient really needed a total laryngectomy given the advanced stage of his tumor.  Chemoradiation therapy might cure him of his tumor and extend his life, but he will likely will have a scarred nonfunctioning larynx since the majority of his normal structures were destroyed by tumor.    However, he refused surgery and opted for the chemoradiation therapy.  In situations concerning cancer, we counsel the patient the best we can on the available treatments, the outcomes, quality of life expectations, etc.  so that they and their family can make the final decision as to how they want to approach their disease.