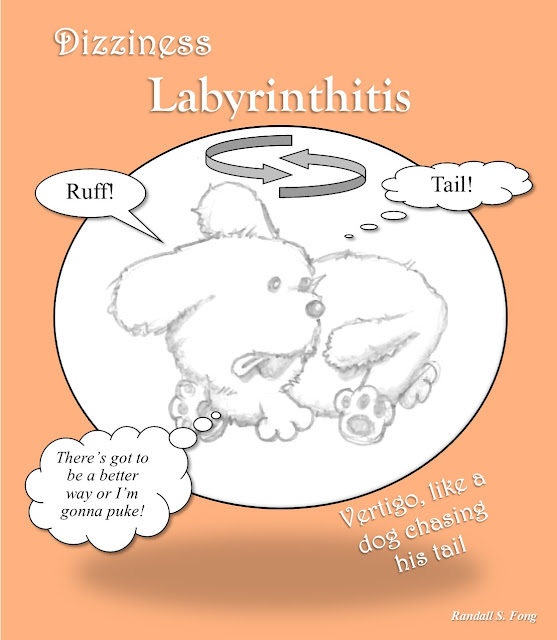 Dizziness…a nonspecific complaint with too-numerous-to-count potential causes, often rendering diagnosis (the true cause of the malady) and proper treatment difficult.  Though the ear can be the source, this diagnosis is typically made by a process of elimination, where other causes must be first ruled-out.  Those with sudden onset dizziness should seek immediate medical attention to evaluate for causes such as:

Bleeding in the brain

This is not a complete list, but underscores the necessity to check for potentially dangerous and life-threatening conditions; this is covered more in Dizziness: Preliminary Considerations--It Might Not Be The Ear.  For obvious reasons, checking for other non-ear related causes is really-super-important, if you get my drift.

Let’s say you don’t have any of the non-ear related bad stuff and you don’t have one of the other ear-related causes of dizziness such as Meniere’s Disease, Benign Paroxysmal Positional Vertigo (BPPV) or Vestibular Neuronitis.  You could have labyrinthitis.

As its name implies, labyrinthitis is an inflammation of the entire labyrinth, or the “inner ear” that comprises both the cochlea (organ of hearing) and vestibular apparatus or vestibule (organ for balance).  Symptoms include sudden-onset hearing loss usually in only one ear, vertigo (sensation of spinning or motion when the body is still) and problems with balance, where you’re unintentionally veering when walking, bumping into walls or strangers on the street.   Assuming you aren’t falsely arrested for lewd behavior or drunken driving, let’s say you made it safely to the ER where the kindly folk there examine you, do some blood tests, perhaps an EKG or other heart tests, scan your brain, and find nothing out of the ordinary.  Then your ear could be the culprit.

We’ve covered the anatomy and the function of the vestibular system so I won’t waste a bunch of words and lure you to sleep--click on the link to satisfy your curiosity, that is, if you’re still engaged and not bored at this point.  It is though, an uncommon cause of dizziness caused by the ear.  I’ve inserted a picture to help. 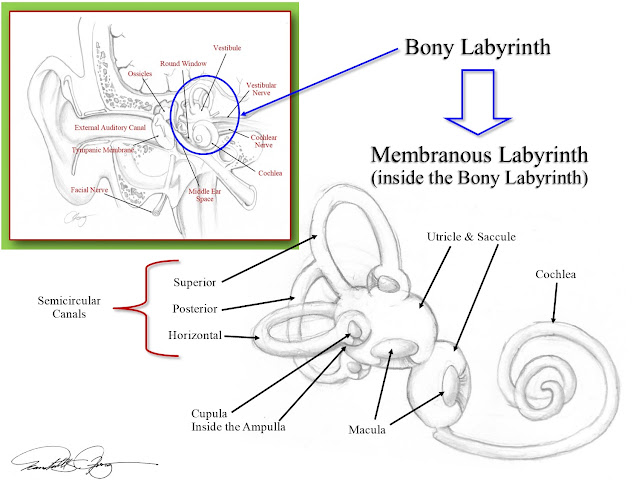 Labyrinthitis can be caused by otitis media, an inflammation of the middle ear space due to retained fluid of that space (space behind the ear drum).  Otitis media is associated with ear plugging and/or ear pain, loss of hearing and often occurs with a cold or some other barometric pressure change such as flying in an air-plane or travelling through changing-altitudes in a car.  The middle ear fills with fluid seeped from the mucosa that lines it, creating a serous otitis media.  Sometimes bacteria proliferate in that fluid to form pus, creating a condition called purulent otitis media or suppurative otitis media.  Toxins from either the fluid can seep into the fluid chambers of the cochlea and then into the vestibule via the round window membrane in the middle ear.  Thus both hearing and balance are affected.  Serous otitis media rarely leads to labyrinthitis, but if so, hearing loss and dizziness/imbalance are typically milder.

Treatment includes antibiotics to kill the bacteria and sometimes steroids to reduce the inflammatory effects of the otitis media.  Fortunately, in this day and age and availability of antibiotics, otitis media usually is caught and treated earlier and rarely causes labyrinthitis.

Medications to help reduce the symptoms  (i.e., meclizine pills , scopolamine patch) are used to suppress the neurons in the vestibular nucleus in the brain which receive signals from the irritated labyrinth and anti-emetics (i.e., ondansetron, promethazine to prevent nausea and vomiting).  Caution: these medications are also knowns as vestibular suppressant medications, and are used on an as-needed (prn) basis.  Long-term may be disadvantageous and avoided, since these medications interfere with compensation from the central nervous system and may thus create dependence.  Often those who take vestibular suppressants for several weeks to months straight need to be gradually weaned off the medications.

Sometimes a myringotomy and tube is needed to drain the middle ear of purulent fluid in more serious cases.  A mastoidectomy (opening the mastoid bone from the behind the ear) is required if significant mastoiditis is associated with this.

Viral labyrinthitis is a more common cause, though less commonly than vestibular neuronitis (which is distinguished from labyrinthitis by no changes in hearing).  There typically is no ear pain, the ear appears normal on exam, and often no prodrome of cold symptoms or travel through altitudes, but sudden onset hearing loss and dizziness are experienced.  It is thought that the virus directly enters the labyrinth possibly via blood stream and not the middle ear.  Treatment centers more on symptom-reduction with the vestibular suppressant medication, with the same caveat of limiting the duration of usage.  Steroids and less often anti-viral medications also can be used but their effectiveness is somewhat controversial.

The initial dizziness with labyrinthitis can be incapacitating but typically the symptoms improve after a few days to a week, with lingering imbalance and milder vertigo episodes as time passes. The (central nervous system (which includes the brain) compensates for the dysfunctional labyrinth, thereby mitigating and ultimately resolving the symptoms and the majority of individuals return to a normal life.  This is the bit of hopeful, good news with this disease.   Hearing however is more variable—some have a complete restoration to normal hearing, others have partial return, and the rest a permanent hearing loss.  If hearing does not improve after 6 months or so, a hearing aid can be very helpful in restoring hearing ability for the effective ear.